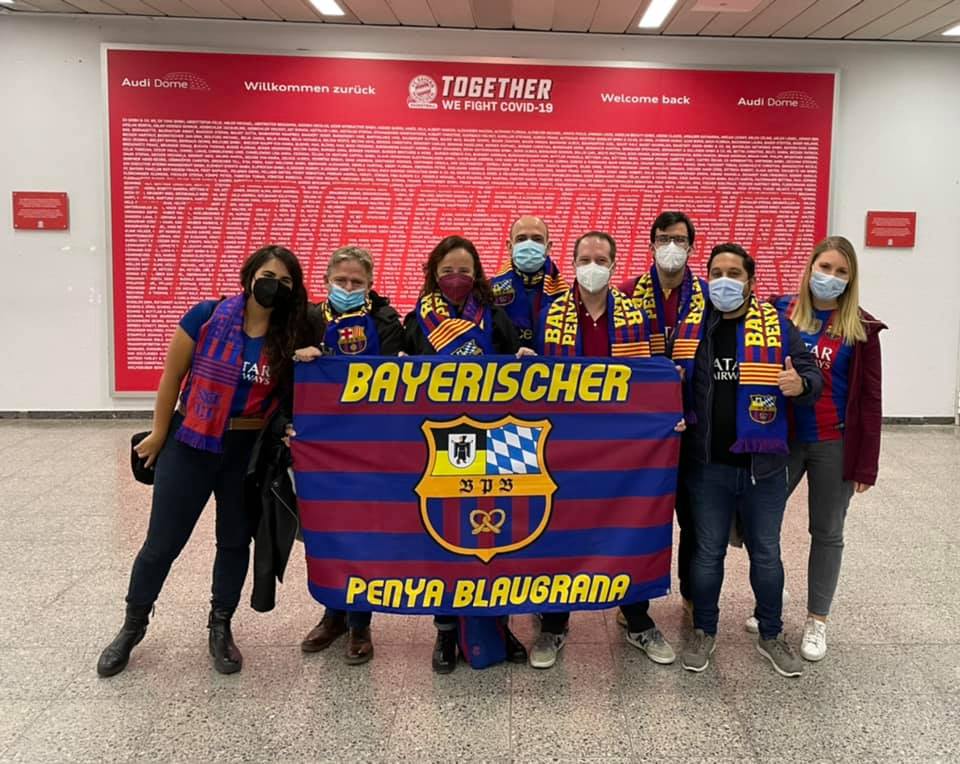 The Bavarian supporters’ club, with almost a hundred members and a strong involvement in the city, has been bringing together German and Catalan FC Barcelona supporters since 2012

There is no better official inauguration’s celebration date than the “Diada de Sant Jordi” [April 23, Festivity of Saint George, special date in Catalonia] for an FC Barcelona supporters’ club based in Munich, specially when it coincides with a Bayern-Barça match in their own city as this year. The Bayerischer Peña Blaugrana was made official on April 23, 2013, a few months after the supporters’ club was created in 2012. Those responsible were a dozen Catalans living in Munich who were usually there to watch the games, and who had also spotted local fans following Barça.

“We missed living the FC Barcelona atmosphere more intensely, especially on big occasions, so we decided to create an entity that would be an ambassador for the Club not only in the city, but throughout the region; that’s why we chose “Bayerischer” (Bavarian) for the supporters club’s name,” explains its president, Teresa Calveras. From the outset, the organization has had around a hundred members, more than half of whom are Catalan students or Catalans who work and live in Munich. “Despite being less than a two-hour flight from Barcelona, being a member of the supporters’ club means maintaining a special bond with Barça and also a stronger way of representing it in a foreign country,” says Calveras.

Many of the undertakings of the Bayerischer Penya Blaugrana focus on organizing or participating in activities that spread the love for Barça and Catalan culture. Together with the Centre Català de Munic, every year they organize “calçotades” and celebrate the “Diada de Sant Jordi”, which is also the date when they celebrate the penya’s anniversary. And, of course, there are also joint outings to Oktoberfest, Munich’s most important festival. “All these activities are not exclusively for supporters’ club members, but are open to the local population, so that they can get to know Barcelona and Catalan culture better. On the other hand, the penya has become a meeting point for Catalans in Munich, who have a place not only to watch Barça matches, but also to help them become part of the city,” says Calveras.

Solidarity is another of the hallmarks of the Bayerischer Peña Blaugrana. The outbreak of the pandemic in 2020 was great proof of this, as the president of the supporters’ club explains: “In view of the seriousness of the situation, we wanted to focus our resources on helping three charitable organizations in the city: Stiftung Ambulantes Kinderhospiz München, which supports children, newborns, young people and families affected by serious illness and/or disability; Münchner Tafel e.V., which distributes food to people in need; and Hilfe für Kids, which works for the participation and equal opportunities of disadvantaged children and teenagers in Munich.”

Following the teams around Europe

As entrenched “culés”, the members of the Bayerischer Penya Blaugrana try to join as many Champions League games as possible to see the team live, as well as all the finals they play in. They also make regular visits to the Camp Nou during each season; in the case of German fans, they sometimes even plan a short vacation in Catalonia to coincide with a Barça match.

Teresa Calveras recalls the most special occasions experienced by the supporters’ club: “The two Champions League semi-finals at the Allianz Arena in Munich, in 2013 and 2015, were quite an event … the mood before and after the matches was fantastic. In 2015, the season ended with the brilliant final won in Berlin that several members of our supporters’ club attended. In addition, our supporters’ club members remember with special elation two matches at the Camp Nou: the 6-1 win against PSG in 2017 and the 5-1 win against Real Madrid in 2018.”

Recently, the penya has also accompanied the basketball team, both at the Palau Blaugrana and at the Audi Dome in Munich when they played against Bayern. They have also cheered live for the women’s team when they have traveled to the Bavarian capital, as well as at the Champions League final in Budapest in 2019.