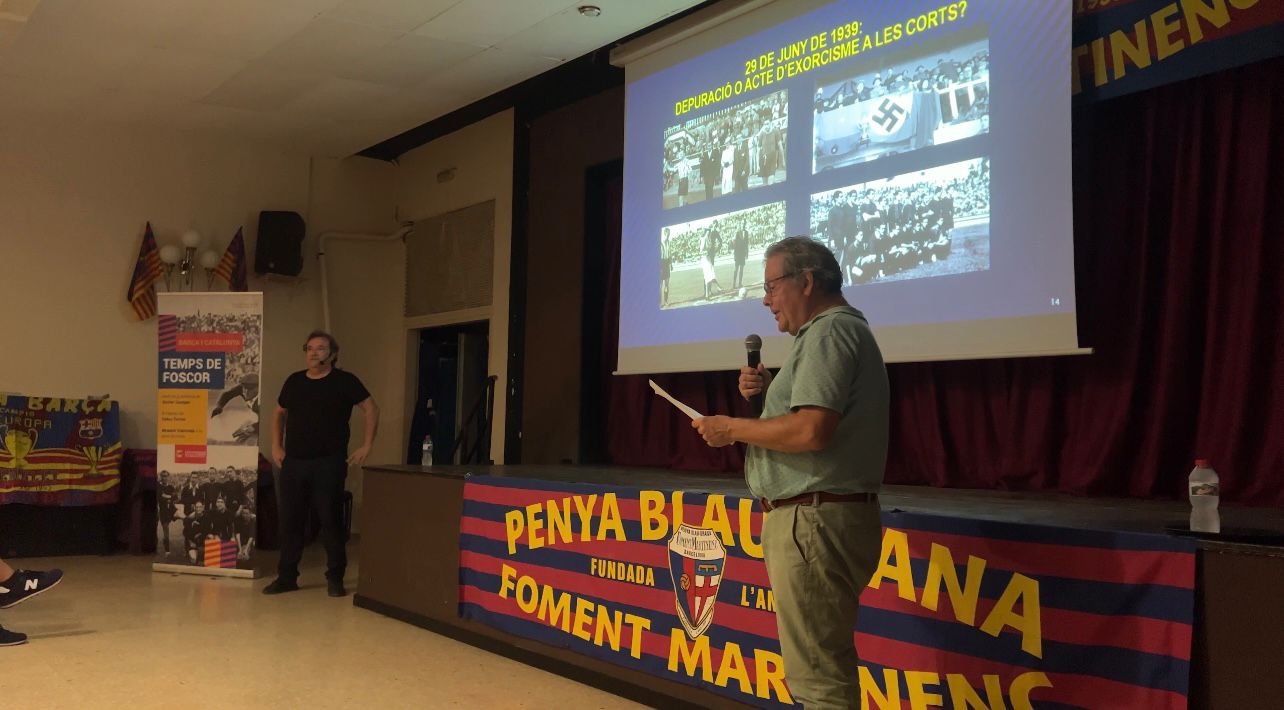 Since 2018, the initiative of the Confederació Mundial de Penyes headed by its vice-president Salva Torres has visited penyes all over the territory.

Last Thursday, the PB Llinars del Vallès hosted a new edition of the conference “Barça i Catalunya. Els Orígens de la Simbiosi”. But it was not just another one, because it was the 100th performance of this blaugrana historical dissemination promoted by the Confederació Mundial de Penyes. Specifically, there have been 79 of its first part “Els Origens de la Simbiosi”, and 21 of its second installment “Temps de Foscor”.

It all started in March 2018, when journalists and historians approved the idea promoted by Salva Torres, vice president of the Confederation. Since then, and with the support of the territorial Federations, the “Barça i Catalunya” conferences have visited supporters’ clubs in Catalonia, Spain and even Europe. They have always aroused great interest, with its high point in the visit to the PB Cotlliure in front of more than 160 attendees.

During this tour, journalists Frederic Porta and Toni Closa; the grandson of FC Barcelona’s founder, Xavier Gamper; historian David Melero; and former players such as Alfonseda, Ramírez, Clos, Amigó, Asensi, Estella or Calderé have participated in the conference, either on a regular or occasional basis. In the new format of “Temps de Foscor”, family members of legends from the 40s and 50s, such as Kubala, César, Raich, Manchón or Monaguillo, are joining the program to talk about their relatives’ time at the blaugrana.

Salva Torres, promoter of the conferences, explains: “It’s not just our conference, it’s everyone’s. We appreciate the disinterested contributions of journalists or scholars of Barça history such as Manel Tomàs, Carles Santacana, Fernando Arrechea, Jaume Sobrequés, Jordi Finestres, Toni Closa, Joan Poquí, David Salinas, Nicolás Sanz, the Gamper family or the aforementioned Frederic Porta. I also thank Aksana Vayevoda for her participation in the technical part and the presentation. And a special mention also to the supporters’ clubs, territorial federations and members who have provided us with some informative gems”.

Looking to the future, the conference tour is progressing at full speed. There are already four requests from supporters’ clubs for October, and another four for November.